The bodyguard now in its 500th show on tour has been a major success for a number  of years. First realised as a Hollywood blockbuster starting Kevin Costner and in 1992 the relatively unknown Whitney Houston. The film not only struck audiences worldwide for its impressive and engaging storyline but for it incredible Music, many of the songs featured in the film have become worldwide hits including one of the all-time bestselling singles ‘I will always love you’ originally written and performed by the great Dolly Parton. I was a huge fan of this film and still am but the production shines in all its glory in the musical genre.

The incredible talent that is Alexandra Burke headlines the production now still Touring and her performance in this show is unbelievable. All things considered I knew her vocal would be good given her rise to fame on the Xfactor in 2008. There she covered whitney’s ‘I wanna dance with somebody’ (watch here) but this was just a taster of her true talent, this role was made for her. I was sceptical of her acting ability and the issues she may have had with the American accent but all my fears vanished in the opening bars of this unforgettable production. Her portrayal of Rachel marron in this show was both refreshing and breathe taking. She lived in her. She was Rachel Marron. The audience immediately forgot Alex and became enthralled in the story. she embodied the voice of Whitney and the moves of Tina turner with her incredible talent, a truly winning combination. 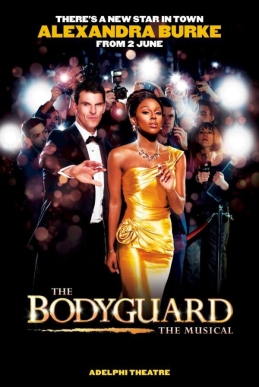 I attended the closing night performance of the show at the Bord Gais Energy Theatre (Dublin, May 2015) no expense was spared on the production and from the word go the raging flames caught my imagination and the ‘queen of the night’ blew us all away, exceeding all my high expectations. The leads and ensemble were so good I almost forgot the film existed and was completely engaged it the real story happening before my eyes. The performers brought a sense of urgency and ‘realness’ to the performance. This wasn’t a copycat production of the film this was a standalone modern rendition of the plot which left the audience speechless.  The lightening and live music were used to heightened dramatic effect to lead the audience into moments of utter suspense and fear, so much so, many had to vocalised this fear with horror film like screams! other famous songs featured include ‘ I have nothing’, ‘ I wanna run to you’ and ‘million dollar bill’ (not in the origional film) full praise goes to the musical direction  on this production lead by Chris Egan, Mike Dixon & Richard Beadle. The orchestration and musical interludes made the show and helped hugely in the transformation to the musical genre.

The bodyguard is still on its uk and us tour and heads back to london’s westend July 15th 2016 staring Beverley Knight, if I was you I’d run and get tickets.

Alexandra burke will return to the Bord gais and Deloris Van Cartier in Sister act the musical  the role made famous by Whoopi Goldberg. I’ll be there!!

I’d also like to personally thank Lawrence Kasdan for his Screenplay and the influence its had on me, only for his creativity, skill and persistence in getting the production behind ‘The Bodyguard’ it would never have existed.

below: when I was the bodyguard….

2 thoughts on “The bodyguard”

This site uses Akismet to reduce spam. Learn how your comment data is processed.